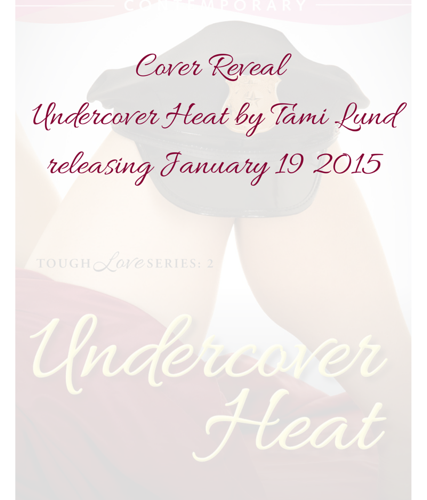 I  hope everyone had a fantastic holiday season!

It’s time to get back to business, so today we have another Cover Reveal! This one is Undercover Heat by Tami Lund. Check it out!

The Tough Love Series by Tami Lund follows the lives of men and women in tough jobs who deserve to find their happily ever after, but often need a little help getting there. The first book in the series is Naked Truth, which was released in June.

Jack, from Naked Truth, is an FBI agent, a playboy, a man who is happy tasting the flavor of the month and not staying for breakfast. He’s perfectly content with his life and has no interest in finding his happily ever after. So when he is attracted to Kennedy at his partner’s wedding, he naturally takes the opportunity to seduce her. Now it’s time to focus on the next good-looking woman who comes along, right?

Ah, you don’t always get what you expect.

Kennedy was burned by her ex-husband—badly. She told everyone he cheated on her, because the truth—that he stole all of her money before disappearing out of her life—is far more embarrassing. For the last three years she’s struggled to pay off her debt, ignoring her libido and refusing to consider allowing another man to get close.

A one-night stand with Jack is the perfect way to break her sexual fast—until she discovers that he’s pouring her morning coffee and frying bacon.

While Jack goes undercover at a male strip club, the two begin an affair that distracts him from his job and puts their hearts—and Kennedy’s life—in danger. Now there’s only one way Jack can stop this killer, and it involves making that declaration they both swore they didn’t want.

On January 19, Crimson Romance will release the second book in this series, Undercover Heat. A year ago, agent Kyra Sanders almost closed the case of her career—almost, but not quite. Her boyfriend and colleague ended up cheating on her with the perp she was chasing, blowing the case and ruining Kyra’s belief in happily ever after. When she’s given a second chance to catch this crook, she’s determined not to let anything interfere.

Quinn Daniels is an FBI agent with a hell of a skeleton in his closet: his father was a career criminal. Locked up in federal prison, he still manages to torment Quinn, never letting him forget that he failed as a son and a human being. Hard-drinking, hard-talking Quinn vows to stay on the straight and narrow.

But when Kyra and Quinn are assigned to go undercover as a married couple, trouble—and desire—flares. Opposites may attract, but can they keep the heat between them undercover long enough to close their case?

Sound interesting? Check out the cover!

And while you’re impatiently waiting for Undercover Heat to be released, why not pick up a copy of Naked Truth, to tide you over?

Or Amazon, where it’s free through Kindle Unlimited: Naked Truth

And don’t forget to add Undercover Heat to your TBR list on Goodreads.

Tami Lund likes to live, love, and laugh, and does her best to ensure the characters in her books do the same. After they’ve overcome a few seemingly insurmountable obstacles first, of course.

If you enjoyed one of Tami’s books, please let other readers know by leaving a review on the site from which you bought it, or on Goodreads. Otherwise, how will they know which book to read next?

Thanks for stopping by!