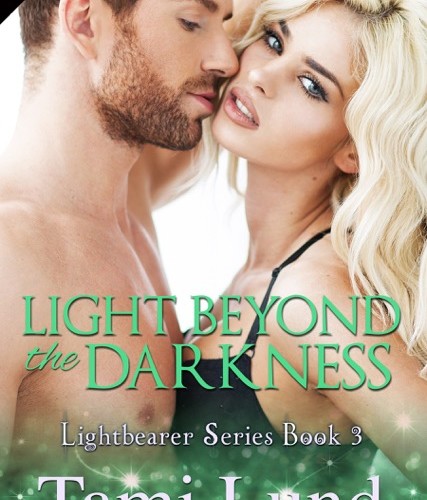 Today I am pleased to share the cover of Tami Lund’s third book in the Lightbearer Series, Light Beyond the Darkness. First, let’s take a look at the synopsis:

Light Beyond the Darkness

In the third installment of the Lightbearer series, lightbearer Carley Santiago and shifter Reid Hennigan are running from their pasts. Hiding in the human world, they meet and sparks fly. But what happens when Carley’s past threatens to ruin her relationship with Reid?

Carley was once the premier chef for kings – the King of the Lightbearers, that is. But when her mate pushes her over a cliff and she miraculously survives, she flees her home, the coterie, knowing he will want to finish the job. She figures hiding in the human world is the best way to ensure her own safety.

While working as a chef at one of Chicago’s top restaurants, she meets Reid Hennigan, a lone shifter running from his own past. Carley tries to push him away – she wants nothing to do with anyone from the magical community – even a persistent shifter who insists he only wants to show her pleasure.

Reid Hennigan is another reject from Quentin Lyons’ defunct pack. When he received word his pack master was dead, Reid ran away from his pack, from pack life, having no interest in being forced to be subservient to another abusive pack master. Unfortunately for Reid, shifters are hardwired to desire to be part of a pack, and he finds himself wandering aimlessly through life, with no clear idea of what to do next. When he stumbles upon the shy lightbearer while eating the best steak of his life, he discovers a new lease on life.

Reid sets out to woo the beautiful, broken lightbearer. Passion turns to love, and Reid figures his life is pretty damn perfect, despite no longer having a pack. But Carley has secrets of her own, and her secrets could be fatal – to both of them!.

I don’t know about you, but I can’t wait to read this! Now for the awesome cover!

Isn’t it great! And it’s perfect for St. Patrick’s Day. 😉

How about an excerpt:

“He sent it back?” Carley asked in disbelief.

Sara nodded. “He said he can tell you didn’t make it, and he refuses to eat anything from this kitchen that does not come specifically from you. He suggested you could come out and talk to him about it.”

Carley shook her head and rolled her eyes. She would just bet he was open to her going out into the dining room to talk to him.

“Tell him I’m not making steaks tonight. Tell him I’m focusing on the vegetarian dishes,” she said suddenly. She grinned when Sara walked away. That ought to teach him.

The waitress returned a moment later. “He wants the vegetarian special,” she said. “And the key lime pie.” She tilted her head and gave Carley a quizzical look. “What’s going on with you and that guy? I thought you said you didn’t know him?”

“I don’t,” Carley insisted. “I know…someone close to him,” she said. She knew Tanner and his mother, Ariana, Finn, and Lisa, the shifters who were currently living in what had once been Carley’s home, the lightbearers’ coterie. Whether this shifter knew them or not, she had no idea. But they were the same species. That meant he was closer to them than any other species, right?

When Sara returned with the empty plate from the shifter’s table, she held it up for Carley’s inspection and said, “He wants to speak to you. He said he’ll summon the manager if you don’t go out there.”

Carley’s heart sank. The manager would undoubtedly force the issue, if it was brought to his attention. He saw no reason why his chef wouldn’t want to go out into the dining room and schmooze customers.

“Fine,” she grumbled as she sliced a wedge from one of the key lime pies she had made earlier in the day. She deliberately dropped it onto its side on the plate and didn’t add garnish before shoving a few strands of hair behind her ear and stomping out of the kitchen.

“Here,” she said as she unceremoniously dropped the plate onto the table.

The shifter gave the sloppy slice of pie a cursory glance before lifting his pale blue eyes and focusing so wholly onto Carley that she was certain he saw absolutely nothing else in the room at the moment. How could someone be that focused? She didn’t think she’d ever had anyone pay her such full attention in her life.

She fidgeted, nervously twisting her hands together before she realized what she was doing and clasped them behind her back. The shifter continued to stare at her.

“You owe me for that one, Carley.”

She visibly jerked at the sound of his voice, low and deep and smooth as whiskey.

“For what?” she asked, wondering how in the world he knew her name and for what she could possibly owe him. As far as she knew, she’d never met the man before yesterday.

“That dinner. As enticing as it was eating something with your magical stamp on it, forcing me to eat vegetables does not put me in a particularly good mood.”

She blinked owlishly. “I didn’t force you to eat vegetables.”

“You refused to make me a steak.”

“Sean’s steaks are practically as good as mine,” she protested.

With a great deal of effort, she pulled her gaze away from his and made a swift perusal around the restaurant. All human, and none were paying them any particular attention, other than the ones she knew were listening at the door behind her.

She frowned. “What is that supposed to mean?”

His voice pitched low. “It means I intend to get to know you, every inch of you, from the inside out. I intend to possess you. I intend to do things—” He reached for her, and she pulled away as if he was about to hit her. He froze, mid-reach and mid-sentence. And then he slowly lowered his hand.

“You’ve been abused,” he stated, matter-of-factly.

She shook her head again. How had the conversation turned to this?

“No,” she finally managed to get out.

“Stop,” she said as she lifted her hand, palm facing out. “Just stop. This is none of your business. I don’t know you. I don’t even know your name, and I have no idea how you know mine. I—” He cut her off.

“My name is Reid. And one of your employees referred to you by name yesterday, when I went into the kitchen to meet you.”

“Fine. Fine. Reid. Look, Reid, obviously you know what I am, and I know what you are. So can we just be honest with each other? What do you want from me?”

“I was in the middle of telling you when you flinched away as if you expected I would hit you.”

Carley blew out a breath. Damned instincts. But it was hard to change the only way she knew how to interact with men.

“It was purely by accident.”

She drew in a ragged breath. “Fine. By accident. Whatever. Look, I’m trying to establish a nice, normal life here. One that doesn’t involve shifters or lightbearers or anyone else from the magical community for that matter. That means there isn’t any room in that nice, normal life for you. So the best thing for you to do is just finish up that key lime pie and go back to whatever pack you came from, okay?”

“I can’t go back,” he replied. “And it isn’t acceptable that you have no room in your life for me.”

Was he serious? She stared at him. He certainly looked serious. If he was joking, he was doing a damn fine job of acting deadpan. Too fine a job.

“I don’t understand,” she finally said.

She flapped her hand. “All of it. What do you mean, it isn’t acceptable? Since when do you have any say in my life?”

“Since I entered it and decided I want you.”

She stared again, her jaw falling open. “You want—”

“Clearly it isn’t for your quick wit.”

She snapped her mouth shut and stabbed her finger at the restaurant entrance. “Get out of my restaurant. You can’t have me. Get out. Now.” She didn’t wait to see if he complied. She turned and stalked back into the kitchen with her head held stiffly, refusing to turn around and look at him again. She didn’t need to, to know he was watching her. Lights above, she could feel the intensity of his stare without having to look.

Just as soon as the kitchen door swung shut behind her, she leaned against the wall and took great, gasping breaths. Her entire body shook as if she was in shock. Hell, she probably was.

Someone thrust a glass into her hand. The stench of bourbon assaulted her nose.

“Drink,” Vivian commanded. Carley obediently drank, and then sputtered and gasped when the amber liquid slid down her throat.

“What did he do to you?” Vivian demanded, clearly having decided she was coherent enough to speak of the incident.

“Well, what happened, then? You’re shaking like a leaf. Something scared the crap out of you. What was it?”

Carley shook her head, but Vivian was a tenacious human being. Finally, Carley admitted, “I’ve never stood up to a man like that before.”

Vivian looked at her as if she’d just sprouted an alien head. Carley shook her head again.

“My father—he wasn’t exactly the most loving parent. And I ended up in a really bad relationship,” she said, conscious of the fact that she’d never spoken of this to anyone, not since the day she left the coterie, five months ago. “I never had the option to say no.” She smiled, just a little. “It sort of felt good.”

“Hell yeah, it did,” Vivian said fiercely. But then she frowned. “Problem with those types, though, is that they generally see someone like you as a challenge.”

“What does that mean?” Carley asked in alarm.

“It means that I doubt this is the last we’ve seen of Mr. Rare Steak.”

Ugh! Now we have to wait until April for the rest.

Tami Lund likes to live, love, and laugh, and does her best to ensure the characters in her books do the same. After they’ve overcome a few seemingly insurmountable obstacles first, of course.

When she’s not doing that, she’s a mom to two (growing far too fast) kids and a furbaby who conveniently forces her to exercise at least once a day. She’s also a wife to her own knight in shining armor who proposed in a way worthy of a romance novel.

Most of all, she loves to write. She figures it keeps her from going insane. Or at the very least, it keeps strangers from believing she is insane, because if she goes too long without writing the characters down on the computer, she tends to start talking to them. Out loud. Often, in public places.

Tami is multi-published, both self and with a few publishers, including Crimson Romance, Liquid Silver Books, and, (as of June 2015) Soul Mates Publishing.

Chances are, there is a new book coming out soon. Be sure to stalk her on social media, so you know when. And most important, if you enjoyed one of Tami’s books, please let other readers know by leaving a review on the site from which you bought it, or on Goodreads. Otherwise, how will they know which book to read next?

On All Romance & Liquid Silver Romance only

Thanks for checking out Tami’s cover reveal. I’m pretty excited to read this when it comes out. How about you?